For the first time, the Iraqi community of Montreal participated in the parade celebrating Canada day, on July 1st 2011.

Within the float, there was a truck decorated with posters reflecting the great Mesopotamian civilization, banners and flag holders, all marching with loud Iraqi folkloric music in the background.

The group was cheered by crowds along the parade route, in downtown Montreal. At the end of the parade, the group was greeted by parade officials and interviewed by the CBC and CTV media.

The ICC would like to express its gratitude to all the members who participated in this event, with special thanks to Kamal Al-Janabi for the design & manufacturing of the banners, Salam Al-Mousawi and the Babylon soccer team,Nather Yousuf for the sound system, Ara Samson for photography and posting photos on the CTV website,Rida Al-Isa for his video and photography, Wurood Habib for her photos, and Ali Altalibi for renting & driving the truck.

This event has set a precedent for future generations to better integrate in the multi-ethnic Canadian society. 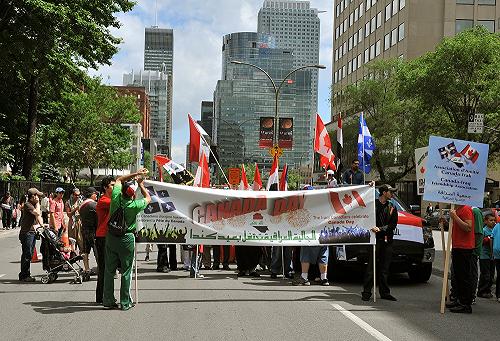