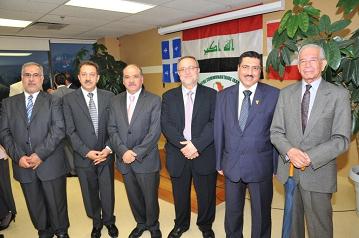 The Iraqi Community Center hosted the new ambassador of Iraq to Canada, Dr. Abdul Rahman Al-Hussaini. Among the guests that attended the meeting, there was the general console in Montreal, Mr. Riyad Al-Tai, as well as many representatives of Iraqi groups & centers with high ranking and distinguished qualifications.
The meeting began with a welcoming speech, delivered by the ICC president, Moayed Altalibi, in which a brief description of the history of the ICC was presented, along with the roles it played and the objectives it sought to accomplish in the community.
Then, the general console welcomed the ambassador and thanked the ICC for the organization of such an event. He also emphasized the continuation of the services provided by the consulate to the community.

In his turn, the ambassador expressed his gratitude and delight to meet the Iraqi community in Montreal, assuring them that the embassy is their home and its doors are open to everyone.
The main topics discussed are the following:

•    The new Iraqi passport (edition A), which will be issued in both Ottawa and Montreal in the near future.
•    The participation of the Iraqi community of Canada in the general census scheduled for October 2010 (the approval of the Canadian authorities is already obtained).
•    Promoting the idea of opening the Canadian embassy in Baghdad by assuring its safety.
•    Other subjects discussed include the Iraqi Cultural Attache, Iraqi universities, hospitals, etc..